The results for Ludum Dare 35 were out earlier this week and as usual I’ll be doing a quick analysis of how I did for my entry SHAPE.SHIFT(), talking about where I did well and where I didn’t (For the post mortem, you can click here).

A slightly lower score compared to my last entry but to make up for it, I actually did much better in terms of standings.

A lower score than last time, which was pretty much expected as there was quite a number of entries that had “shape in the hole” gameplay concept (and mine was no exception).

This was probably the category that would have changed the tide in terms of overall scores if I decided to do things a bit differently because the game’s polarising hard difficulty. Whilst some people gave it a high score in fun because of how addictive the game turned out to be, there were others who gave it a lower score because they found it too hard to play. Along with that, there was also a number of people with mixed opinions about the game’s fun factor and ended up rating it 3 out of 5 as a neutral response.

This was a rather nice surprise and a much better improvement compared to the last few times I entered the Graphic category for Ludum Dare since I’m primarily a coder and not an artist by any means. Despite using a combination of Unity’s 3D primitives and some simple modelling in Blender,  I was glad people liked the retro cyberspace/neon aesthetic I ended up fitting the game with. 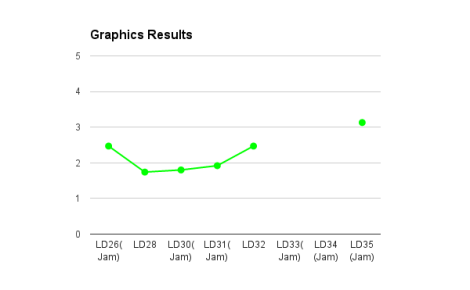 The mood category tends to be one of the two categories I tend to opt out of every Ludum Dare (the other being humour) since my entries don’t normally have some sort of story or emotions I want to invoke but with the neon/cyberspace aesthetic I was using for the game, I decided to opt in for mood this time which turned out to be a good decision as I ended up with a new personal best for mood.

Despite the lower than usual scores for all the other categories I entered, surprisingly I actually did pretty well in the overall category (coming pretty close to my first Ludum Dare entry). I think the reason why was that compared to all my other entries, this one felt like the most polished one so far.

The only other category that I opted out of (besides Humour) was Audio as I used a 3rd party asset for the music.

In conclusion, despite doing not as well as I’d expected, I should be considering this game jam as a success since my average scores throughout were the highest it’s ever been (As mentioned before, this would imply that it’s the most polished entry I’ve made so far). If I had balanced my game’s difficulty better then I probably would have gotten slightly better scores (particularly in Fun). Nevertheless, I would very much like to continue working on the game someday (as my next possible full indie project),  adding in more features such as extra shapes, a reworked control system, gamepad support as well as rebalancing the difficulty and turn it into a fully featured title for PC and consoles.

Hello and welcome to the portfolio of Jason Tuyen, a video games developer based in London, UK with 5 years of experience including C#, Java, Unity, Android and Windows Phone.

Please feel free to check out some of the work I've done.